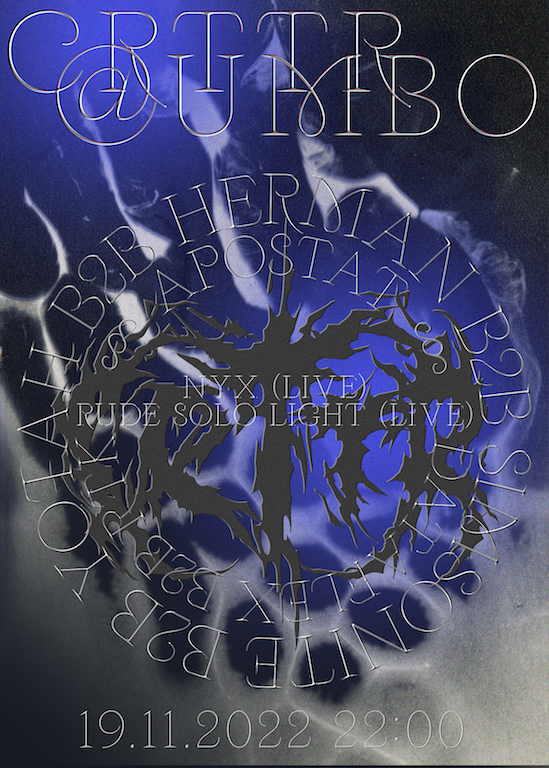 CRTTR is a Bern based collective and label. They host regular radio shows at Radio Bollwerk and TRNSTN RADIO, organize events in various forms and release tapes. For their first event in Zurich they invited Nyx, Rude Solo Light and Apostat. The evening will be finished by two b2b(2b) combos composed of CRTTR members: Herman b2b Simsonite b2b Yotah and Dataflex b2b RTK.

Nyx is a Bern-based composer and sound artist active in many musical niches. For this event, she will perform one of her solo electronic sets, which are a refreshing take on current reappraisals of drone and industrial music, not shying away from brute force and energetic whipping rhythms.

Rude Solo Light, a duo consisting of sound artists and composers Manolo Müller and Pascal Lund-Jensen will perform their latest live performances“Unter’m Paradies”. The project may serve as an ongoing reflection on how we can perform electronic music: by focusing on alternative strategies for developing and interacting with musical software as material.

With a background and education in classical music, and after spending many nights & days in front of dj booths - apostat started to get curious about exploring electronic music for herself. Passionate about a broad range of sounds she‘ll see where the night takes her…